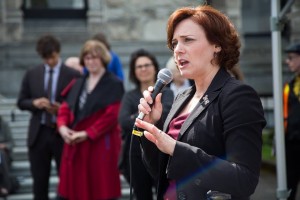 VICTORIA— Despite protests across the province, the B.C. Liberals have raised the price of bus passes for people with disabilities from $45 a year to $624 a year.

“Raising the cost of bus passes for people with disabilities is wrong, it’s mean, and shows that the Christy Clark government has the wrong priorities.”

Mungall noted that while people on disability are being asked to pay more for transportation, Premier Christy Clark is spending tax dollars on flying her personal photographer around the world, and on private jets for herself.

“It’s outrageous for Christy Clark to spend hundreds of thousands of dollars on private jets and personal photographers while hiking the cost of bus passes for people with disabilities,” said Mungall.

“While the premier’s tastes become more and more extravagant, life keeps getting less and less affordable for ordinary British Columbians.”