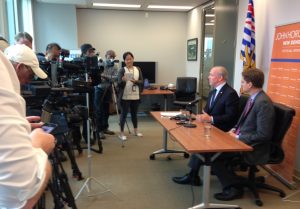 VANCOUVER— Today brought more evidence that the Christy Clark government has no plans to get serious about addressing the housing crisis in this province, say New Democrats.

“It took the finance minister almost as long to announce his so-called data as it did to collect it in the first place,” said New Democrat Leader John Horgan.

“The Christy Clark government dismissed every serious academic study on the housing crisis facing our province. But today, they announced results from 19 days of self-reporting data and tried to suggest that it is definitive.

“For years the B.C. Liberals stood by while a problem turned into a crisis.

“Today, young people are being priced out of the market, renters are losing their homes and companies are struggling to attract workers. But according to Christy Clark and her government, all that these people deserve is a vague YouTube video and 19 days of half-hearted data collection. That’s shameful.”

Just one year ago, Housing Minister Rich Coleman was trying to suggest that the government had all of the data it needed to know what was happening to housing prices. “We’ve worked with the real estate guys for years and have got data on sales,” Coleman told a reporter.

New Democrat housing spokesperson David Eby says it shows again that the Christy Clark government is completely out of touch with what’s happening in this province’s overheated housing markets.

“A year ago, the Christy Clark government thought their real estate friends could tell them everything that they needed to know about housing affordability,” said Eby. “Today, they’re content to ignore warnings from our national banks, from FINTRAC, and from academics, because they’ve collected 19 days of self-reporting data on citizenship status. It’s incredible.”

Horgan and the New Democrats have called for real action to address housing affordability in B.C.

“I proposed a bill that would discourage speculators from using B.C. homes as safety deposit boxes for wealth, and a tax on speculators that would raise money for affordable housing initiatives,” said Horgan. “The Christy Clark government killed the bill, and failed to propose one of their own. Today, they still haven’t taken any action to deter the speculative activities that are driving up prices.

“Just last week, I proposed a task force to fight fraud and money laundering in the real estate industry, and this past spring, New Democrats proposed a bill that would give more protections to renters facing renoviction.

“While we’re proposing real action, the Christy Clark government continues to tinker around the edges.”