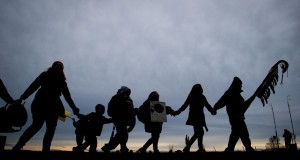 During a health parliamentary committee hearing late last week, Larson asked: “How long do you think before the legacy of those residential schools finally burns itself out of the First Nations people?”

“A question like that reveals remarkable insensitivity on the part of an elected representative toward the tragic experiences suffered by First Nations people in B.C. residential schools,” Horgan said.

“We should never forget what happened, so that we can ensure nothing like that ever happens again. Premier Christy Clark should immediately ask her MLA, Linda Larson, to apologize for her offensive and insensitive comments.”

Horgan pointed out that Larson is the premier’s parliamentary secretary for rural education, and saying these comments is particularly troubling coming from an MLA with responsibilities that touch on so many First Nations children in our school system.

Larson later asked, “How many generations is it going to take before the words ‘residential school’ no longer play a part in how people feel?”

“It is wrong to hope that the tragedies of history are forgotten a couple of generations down the line, and try and pretend that they never happened,” said Scott Fraser, New Democrat aboriginal relations and reconciliation spokesperson.

“It is important for those future generations to know what happened at B.C. residential schools and what the repercussions were so that they don’t make the same tragic mistakes. That is an important part of reconciliation.”

“Premier Christy Clark needs to make it clear that she finds these comments from her caucus MLA unacceptable. The premier has already referred to some First Nations in B.C. as ‘rag tag,’ and Larson’s remarks are even more callous, and culturally insensitive,” said Mark.

“The Christy Clark government’s off the cuff remarks that dismiss First Nations and their experiences in residential schools are unacceptable, period. Not another day should go by without a public apology from Linda Larson.”

A transcript of the Parliamentary Committee on Health meeting can be found here: