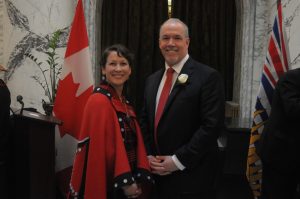 “Melanie Mark has exceeded everyone’s expectations and proven to be a truly extraordinary force in British Columbia,” said Horgan.

“Melanie’s experience in working with B.C.’s Representative for Children and Youth before she was elected gave her a strong understanding of the challenges the most vulnerable kids in B.C. face, particularly children and families from First Nations.”

Mark served as deputy spokesperson for housing since being elected in a by-election earlier this year. She has fought for people struggling with B.C.’s housing affordability crisis, particularly for renters and low-income people in Vancouver.

“Melanie will be a relentless advocate for the most vulnerable kids in this province,” Horgan said.

The full Official Opposition Shadow Cabinet can be found here.