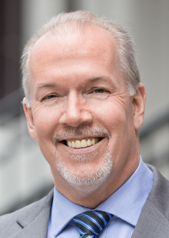 With less than a year to go before the next election, British Columbians are wondering who Premier Christy Clark is really working for.

We just finished the last full legislative session before the election period begins, and what we saw was a premier who, instead of working for the people of British Columbia, is hard at work for her friends, her party and herself.

The session began with a budget that doled out a quarter of a billion dollars in tax breaks for millionaires, while clawing back affordable bus passes from people living with disabilities.

We then learned that not only was the premier hosting secret, $20,000-a-plate dinners, but that she was getting paid a $50,000 top-up from those fundraising dollars on her already generous $200,000 annual salary.

It’s becoming increasingly clear that the Christy Clark government has very different priorities than those of B.C. families.

All across the lower mainland, families are struggling with skyrocketing housing costs, housing instability, and food costs that are spiralling out of control while wages stagnate.

Instead, this session, we saw failures in almost every part of government brought to light. A report from the Auditor General called the B.C. Liberal approach to mining regulation a “decade of neglect” that led to the Mount Polley disaster and will leave us on the hook for untold environmental and monetary costs. A report from the Representative for Children and Youth highlighted how the B.C. Liberals refusal to act to protect vulnerable children is leaving youth in dangerous situations.

This session showed that the real priority of the Christy Clark government is winning at all costs. We see that in the conduct of the people leading the party and the people working for them.

The executive director of the B.C. Liberal party is facing charges for destroying government documents. A Ministry of Transportation staffer faces charges for destroying emails and then lying about it. And the session ended with yet another Christy Clark operative, Brian Bonney, facing serious criminal charges for actions he took to promote and protect the premier.

In contrast to the Christy Clark government, New Democrats spent the session proposing real change to make life better for British Columbians. We introduced legislation that would curb real estate speculation and improve housing affordability in Metro Vancouver. We brought in a bill to get big money out of B.C. politics, restore pre-election spending limits and make B.C. hydro more affordable for families who are struggling to get by. After it was revealed that water in many B.C. schools has dangerously high levels of lead, we brought in a bill that would require yearly testing of school water, and measures to deal with lead in the water where it is a problem.

We stood up for the issues that people in this province care about – while the Christy Clark government blocked every single one of our bills.

If this session demonstrated anything, it showed just how arrogant and out of touch the B.C. Liberals have become.

The people of this province deserve better than what they are getting from Christy Clark and her government.​