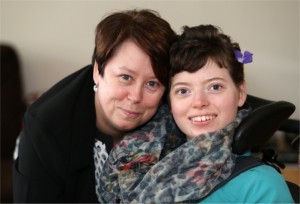 Margaret Lavery and her 19-year-old daughter, Katrina, are fighting Community Living B.C. over finding a suitable place for Katrina, who has a developmental disability. Photograph By BRUCE STOTESBURY, Times Colonist

The NDP criticized the B.C. government Monday for its “hardball” dealings with a Victoria mother whose 19-year-old daughter has a developmental disability.

Victoria-Swan Lake MLA Rob Fleming, who has been assisting the family since September, said he’s troubled by the province’s decision to cut the family’s care hours after they rejected a group-home placement as potentially unsafe.

“It’s a bit hardball to present a parent with a choice of: ‘You take this placement or you’re going to lose nursing support hours,’” Fleming said.

Margaret Lavery believes the government is punishing her for being too fierce an advocate for her daughter, Katrina, who has complex needs and has been receiving 24-hour care at home.

The Victoria mother says she wants to find a group home for her daughter, where she can live safely with others of the same age. But she rejected the government’s latest and only serious offer because one of the group-home residents is potentially aggressive, she said.

Lavery says Katrina would be prevented from moving freely in her wheelchair or would have her movements constrained in order to prevent contact with the resident. The mom says she rejected the placement on April 4 and received a response the same day from Community Living B.C., which oversees supports for adults with developmental disabilities. The agency indicated that Katrina’s at-home care would be cut from 24 hours a day to 16 hours effective yesterday.

Lavery, who filed a formal complaint with CLBC last year over its handling of her daughter’s case, believes the agency is being “punitive” in its dealings with her. Lavery, who works as an interpreter for the deaf, said she can’t go back to holding down a full-time job that takes her out of town and still care for a daughter with complex needs.

“The reason why I’m here is because they haven’t offered me any homes,” she said. “It’s not as if I haven’t planned.”

She said it was the government’s decision to create 24-7 care when Katrina became an adult last August. “They built a life around 24-7, not me. I asked for a group home.”

CLBC confirmed in a statement late Monday that it’s moving ahead with its plan to reduce care hours.

“These hours can be scheduled flexibly for the week, and our provider will work with her to find a timetable that works, and manage a smooth transition,” said Randy Schmidt, communications director.

“CLBC remains willing to work with the family if they choose to consider other staffed residential options.”

The agency says it put “temporary” supports in place when Katrina made the transition to adulthood last August and that Margaret Lavery knew the supports would be reduced if she chose to keep Katrina at home.

“That, to me, is not the way to find a resolution here,” he said in an interview. “Katrina has very specific needs. She needs round-the-clock monitoring and support. And to cut her nursing hours because the family has rejected a placement that they viewed as inappropriate and unsafe for her is not the way we would expect the province to be dealing with parents.”

Fleming said it was CLBC that failed to create a proper transition plan for Katrina to ease her into adulthood and allow her to live independently of her family, he said. “So it’s through no fault of [Margaret’s] that many, many months have gone by where no suitable home has been created for Katrina, and I do hope that this will be resolved soon.”